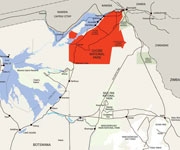 Chobe National Park is a large wilderness area covering nearly 11 000 square kilometers, which makes it the third-largest park/game reserve in Botswana.
During the 1930's Botswana was still a British protectorate known as Bechuanaland. In those days very few people visited the Chobe riverfront, and the area was used mainly for hunting and timber. The large elephant population lured many a hunter to the area during the time when ivory trade was rife, and conservation of wildlife and the environment was not a high priority. The then commissioner of Botswana, Colonel Charles Rey, wanted to proclaim the area a reserve, however his dream was only realised in the early 1960's when the Chobe National Park came into existence under the Bechuanaland Government proclamation no. 22 of 1961.

The Chobe River forms the northern boundary and in the extreme southwest corner it borders onto Moremi Game Reserve. The primary function of Chobe National Park is the protection of the full range of southern Africa's large predators, as well as the localized puku antelope and migratory elephant population, which can number up to 70 000.

The Chobe National Park offers extreme contrasts and a variety of wildlife experiences within the confines of one park. It covers a variety of vegetation types and geological features that vary from the almost tropical habitat of the Linyanthi swamp to the severe, desert-like landscape of the Savuti, and from the lush Chobe floodplain grassland to the deep sands of the Brachestegia woodland.

It also has the Mababe Depression with its black cotton soil and Acacia scrub, as well as the pan-studded mopane and Combretum areas at Nogatsaa.

Four main areas have been developed in Chobe (namely: Savuti, Chobe River, Linyanthi, and Nogatsaa), each of which offers a unique experience. The Savuti and Chobe River Front areas will be discussed, since these are the two areas of focus during the trail.