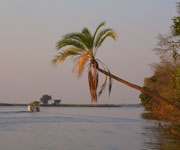 The Chobe river has its origins in the highlands of Angola and flows in a south-easterly direction. This section of the river is called the Kwando.

When it enters Botswana, it not only changes its name, but also undergoes a dramatic 90 degree change in course at the point where it meets a major fault line. The name of the river changes another 3 times before it reaches the Zambezi river.

After entering Botswana the Kwando river becomes the Linyanthi. At Parakurungu it becomes the Itenge and only near Ngoma Gate does it become the Chobe river. From the point where the Chobe abruptly bends, The Magwegqana or Selinda spillway links the Delta to the Chobe.

It is popularly believed that the Selinda can flow in both directions, resulting in the Chobe doing the same. This is not true. In fact, the water merely backs up for a considerable distance, creating the impression of a change in the current.